Since 1982 the Crittenden family has nurtured the soil and tended the trellises in the foothills of the Mornington Peninsula, to grow grapes in the acclaimed maritime climate. This has produced a range of wines that the family loves and that we proudly share with others.  From an early passion for chardonnay and pinot noir in the 1980s, we now also embrace exciting new styles from Italy and Spain. It’s a genuine family operation, with Garry overseeing the vineyard, Rollo heading the winemaking and Zoe co-ordinating the marketing. 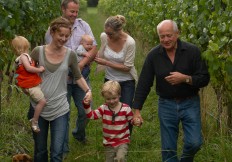 It’s called Crittenden Estate and it has been described as one of Australia’s leading small family vineyards, but, between ourselves, we just call it ‘the farm’. As children Zoe and Rollo were lucky to grow up among the vines and fruit trees, chasing the chooks and dogs, and rafting on the lake. These days we’re privileged to still be here, and to be making beautiful wines for your enjoyment.

“To me, satisfaction is creating something from scratch that your children see fit to continue and grow and maybe even one day pass on to their children.”

“This is much more than a job to me. It gives me great pleasure to create wines from our family farm for people to savour and enjoy.”

“I love working in this business; helping the family to craft quality wine, but in a sustainable way that is sympathetic to the environment and respectful of nature. I’m really proud of what we do.”

Rollo and Zoe grew-up among the young vines, and it was possibly the magic of grape growing that encouraged Rollo to head to the vineyards of Europe and America after finishing school, where he honed the skills acquired from working with his father.  Garry was one of the first in Australia to introduce Italian wine varieties and we have since also embraced the enticing varieties of rural Spain.

We’re not sure whether it’s a case of ‘nature or nurture’, but Rollo’s award as ‘The 2010 Australian Young Gun of Wine’ and Garry’s elevation to a wine industry ‘Legend’ of the Melbourne Food and Wine Festival in 2012 might point to the fact that it’s something in the genes.  We’ll wait to see what the third generation will bring.

Garry’s long-standing love of wine saw him shift his passion from horticulture to viticulture during the late 1970s. He spear-headed the emergence of the Peninsula as a wine growing region and our first five acre plantings more than doubled the area under vine in the region.  The cellar door tasting room and a winery café under Margaret Crittenden’s culinary expertise marked the beginning of wine tourism in the area and a new industry for the Peninsula. What began as that humble café is now one of the Peninsula’s acclaimed restaurants under the ownership of Zac and Jacqui Poulier.

Just on 30 years ago when we first planted vines on our Estate at Dromana we were regarded as ‘cutting edge’ with our viticultural practices, no doubt in part due to our innovation, willingness to experiment and strong horticultural background. We led the way in cool climate vine management being among the first in Australia to install lift and gather wires for our vertically trained trellising, our utilization of inter row delving and mowing and our pioneering research into Regulated Deficit Irrigation.

Who could have foreseen way back then the monumental changes that would take place in the world’s  climate and ecosystems and all of the flow-on concerns? Certainly we didn’t! As the years went by we began to see a difference in the vine’s annual response to the way we managed them, what you could call a gradual diminishment of vigour. So, about four years ago we embarked on a detailed analysis of the soils on which our vines rely for their health and well being.

Constant chemical fertilization followed by the obligatory corrective applications of lime plus the relentless use of herbicides had left our soils compacted, confused, depleted and lifeless, in short, they became nothing more than an artificial growing medium. So began a slow journey to restore the health of our soils through a process of observation, biological analysis, and working with, rather than against, natural processes and cycles. We counted the worm, bug and fungus population in our vineyards so we could monitor and benchmark our progress, and we undertook extensive research through the available literature to come up with the best way of reinvigorating our soils.

As a result of our observations and research we now use a whole suite of biological, organic and bio-dynamic farming techniques—although it is important to note that we are not seeking certification, and, therefore, make no claims to being fully organic or biodynamic in our labels.

We describe our farming philosophy instead as ‘biological soil management’. We are concerned more about the worms and bugs and less about the weed population and appearance. The changes we have wrought in our soils in the past three years are nothing short of astonishing and this has been achieved by a process of interrow cropping with green manure crops in both summer and winter, the abandoning of herbicides and artificial fertilizers and our secret weapon, the Mother of all Compost Heaps. Our compost heap is an annually renewable resource made up of grape skins, stalks and prunings,  recycled green and hard waste from the property plus locally sourced animal manures. This ferments away for months with regular turning and then is spread into the inter-rows prior to the sowing of our winter crop. The 2009/2010 heap measures about 200 cubic metres. This, plus our green manure crop, is our only source of “fertiliser”! Needless to say we monitor our vineyard summer spray program of copper and sulphur used against fungus outbreaks very carefully and keep them to a minimum. In many ways, what we are doing now is simply returning to the days of the old fashioned farmer who practiced biological multiculture rather than economical monoculture. In those times – perhaps even as recently as the fourth decade of the twentieth century – a mixture of animals and crops were rotated in an harmonious cycle, with the one giving sustenance to the other. All this took place naturally and had no need of the intervention of chemists and economists. Take a look at the adjoining photos which provide a snapshot of the various seasonal activities we employ to restore life and vigour to our soils. At the end of the day we want to produce intensely flavoured grapes in moderate abundance from happy and healthy vines. As each vintage passes we are more and more convinced we are on the right track with our unique approach to vineyard management.